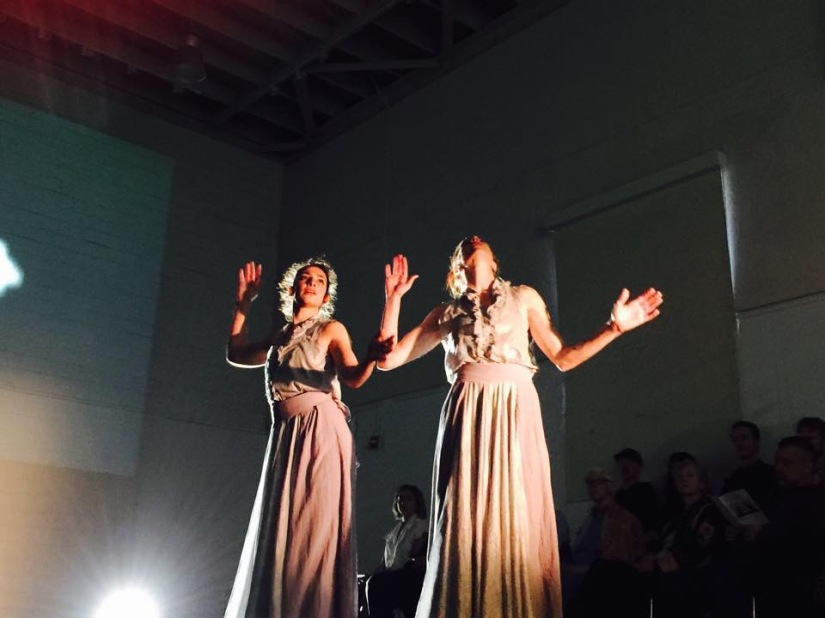 My research articulates how information is stored and transmitted through bodies in performance, from my first book on archives of watching in early twentieth century Germany, to my more recent work on dance and data. I do not identify as a touch scholar, even though I come to academia from a career as a professional dancer and teacher of somatic modalities, both of which rely heavily on tactile feedback, and I have also supervised postgraduate research around touch — including Lisa May Thomas, whose terrific post appeared on this blog last December. But palpability is a concept that fascinates me, especially in relation to breath.

Whereas in some technological contexts, “palpable” may function as a synonym for tactile, I’m interested in the slippage between the dual meanings of palpability: between that which is perceptible and that which is tangible. In this sense, breath might be seen more as a kind of limit case for touch — representing the body at its most permeable to the world at the same time as it is challenging to make that embodied breath experience perceptible to others. I have been thinking about this in more recent historical work around the intersections of performance, breath, and measurement from the Victorian era to the present. However, the idea of palpability comes first from my Breath Catalogue collaboration (with Daniel Thomas Davis, Ben Gimpert, and Megan Nicely), with its goal of “making the dancers’ breathing palpable to the audience.”

Breath Catalogue uses experimental dance and technology to create what we call a cabinet of breath curiosities in performance. The model is drawn from historical cabinets, except that we use a combination of choreography and “breath media” to collect and catalogue sensory experiences of breath, and then live performance to re-access them and share them with others. Each “curio” of the performance consists of one particular breath property and pattern, together with a set of somatic and staging choices that support both the performers in retrieving the specificity of that breath curio, and the audience in keeping the breath as a priority in how they watch a moving body that has so much else going on. In an invited talk given at Hold Me Now: Feel and Touch in an Unreal World — an event hosted by the Stedelijk Museum and Studium Generale Rietveld Academie in Amsterdam — I had an opportunity to revisit Breath Catalogue in terms of its goal of palpability specifically; I focused on breath’s palpability as such, then in conjunction with breath data, and finally as a problem that is negotiated through performance. (This is also where I first met Carey, Director of IN-TOUCH, whose great summary of the event is here.)

In relation to IN-TOUCH’s work, the physical cabinet installation that we build and display in the anteroom of the performance space is a potential point of connection in how it brings the tactility and the perceptibility of breath into contact. The cabinet functions as a kind of warm-up for spectatorship — both conceptually to the idea of breath as materializing in many dimensions, and somatically to the sensation of breath in their own bodies. When opened, each of the 15 drawers of the library card catalogue contains a different task. For example, one drawer labeled “save” contains white balloons, which audience members are asked to fill, tie off, and walk to a corner, using one breath per step; this calls attention to breath as physically holding space and also the uniqueness of each person’s breath in relation to the growing pile of audience breath balloons. The “inhale” drawer contains Listerine strips with the instruction to place one on your tongue and inhale deeply. There is a drawer to “listen” in advance to recorded breath media that will appear in various curios. And “memories” is full of feathers, one of which is meant to be blown in the air while recalling a moment that took your breath away.

While Breath Catalogue is not an audience participation show, we want the audience to engage with their own breath through our performance, and many describe afterwards holding their breath with us at various moments, or suddenly discovering that they had tuned into our patterns of inhalation and exhalation. Before entering the performance space to do so, the cabinet installation focuses on the palpability of audience members’ own breath to themselves. In the theatrical context, those sensory experiences then become the basis on which to heighten the palpability of others’. 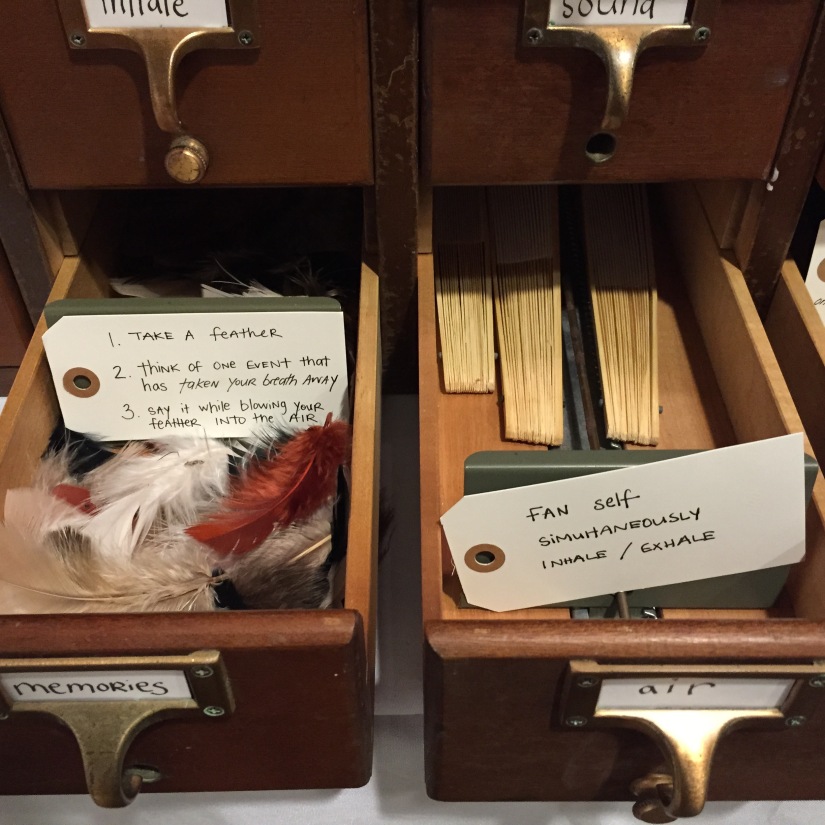