This blog post reports and reflects on the ‘Hold Me Now: Feel and Touch in an Unreal World’ conference (21-24 March 2018), with a focus on the days IN-TOUCH attended (days two, three and four).

The conference was a productive and thought-provoking experience for the IN-TOUCH project.  It was a between the Stedelijk Museum Amsterdam and Studium Generale Rietveld Academie. At the start of each day, Jorinde Seijdel, ‘Hold Me Now’ Curator in Chief, framed the conference by reading a statement that foregrounded the role of touch in our lives and asked a number of questions:

“Touch is of vital importance to our emotional and neurobiological development. So how do we feel and more specifically touch in our technologically mediated dematerialized digital cultures? Do we solely stroke and swipe our screens? How is the body and its feel involved? Are we in fact cultivating different tactilities in relation to the world and others? Further, how can we trace the ways in which touch informs and reforms the body with respect to violence, gender, sexuality, democracy, and identity? If art and design have privileged sight and sound, should touch – and all the senses – be addressed and activated in order to help us stay ‘in touch’ with our bodies and the material world?”

She and her team brought together contributors from a wide range of disciplines, with each day curated by a leading scholar (Karen Archey, Mark Paterson, Rizvana Bradley, and Jack Halberstam) who was tasked to “Inaugurate a discursive and performative programme on how the haptic – relating to or based on touch – is thought and experienced artistically, philosophically, and politically in life, art and design, and theory.” These four curators conceived of touch in different ways, orientated by different concerns and interests and disciplinary trainings. This enabled an interdisciplinary trajectory of ideas and questions to unfold across the four days of the conference.

Along-side the curated programme were a range of design provocations. These included a palm-sized book – titled ‘Lexicon’, designed as an ‘assemblage of words and their terms’ to provide some clarity and support across the ‘struggle’ of working with touch. In addition, the conference website when accessed on a mobile phone refused the affordances of the touch screen. It demanded instead that the user scroll the site by holding and orientating their phone itself – mobilizing and contorting the whole body with the phone to ‘scroll’, rather than the usual small and hand based discreet swipe and scroll interaction with a phone. 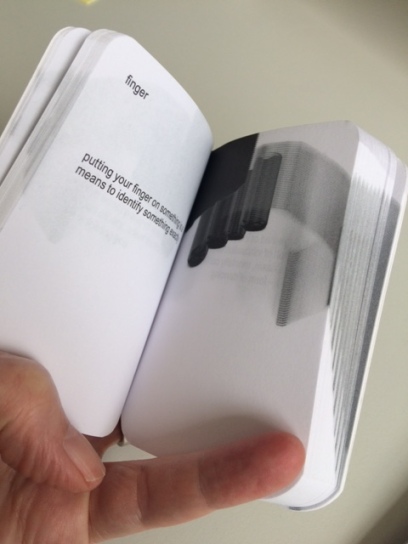 In-TOUCH contributed to the second day curated by Mark Paterson, ‘Haptics, Creativity, and Knowledge Between Bodies’. The day explored how the digital reconfigures touch in a range of contexts, what Paterson described as ‘the creative arrangements of the senses, translations between modalities, a realm of experimentation in the service of knowing more about bodies, senses, and space’. The day drew attention to the ways in which social science engages with sensory knowledge production, and the creative methodologies and approaches it draws on to understand ‘bodies and their boundaries’.

The third day, ‘There’s a Tear in the World: Touch After Finitude’, curated by Rizvana Bradley, set out to explore touch a means of extenuating the body into the environment – the physical, material, aesthetic potential of the body. She designed the day to ‘explore diasporic forms of world-making, dynamic philosophies of movement, the violence of cartographic and architectural imaginaries, the material trace of touch in economies of performance, and the haptic violence manifested in history’s archival inscriptions’.

Jack Halberstam curated day four, titled ‘Reach out and Touch (Somebody’s Hand): Feel Philosophies’, and invited us all to ‘be or become ‘philosophers of the feel’. They approached touch as ‘an important gesture within the political repertoire of queer and trans subjects who centre the body and its desires, needs, limits, and potential’. Halberstam calls us to attend to ‘feeling over knowing uncertainty’, the need to move beyond the visual and Western understandings of ‘a coherent body’ and the productive tensions created by ambiguity.

Here we foregrounded three themes as points of reflection for IN-TOUCH: methodologies, the potentials of literature for exploring touch, the historicity and situated-ness of touch

The question of how we can research touch by finding other ways to know and explore was a consistent feature of the conference. Many methodologies circulated across the days, including the building of archives (Kate Elswit’s Archive of Breath); ethnographic study of tactile analogies in medical training (Anna Harris); media archaeology (David Parisi); the use of literature (Hortense Spillers) and poetry (Aracelis Girmay) as a way of accessing the historical vaccums and voids of untold (untouched) experiences, of ‘how to tell a story that cannot be told’; art (Stahl Stenslie, Lynette Yiadom-Boakye, Julia Bryan-Wilson) and differently so choreography, dance (Ligia Lewis, Kate Elswit), and performance as ways of viscerally interrogating the body and touch (Wu Tsang, boychild, Paul Preciado). Kate Elswit engaged with wearable technologies and the quantified measurement of bodily movement to ask how human bodies are re-imagined and interrogated by bio-metrics, and what other ways we transition from feelings to measurement in the realm of touch. She visualized, saved and retrieved breath to create a ‘catalogue of breath’, an archive made of filmic breathing and breathlessness. Throughout the days, archival research emerged as key method for exploring and attending to ignored, marginalized and ‘lost bodies’, and as having a potential to re-write imaginations of bodies and touch.

IN-TOUCH reflections: This promoted the question of what an archive of touch <a tactile curio cabinet> might look like for our project What archives might we explore, and what might we build: whose touch would be captured, what would it include (and necessarily exclude), what would our classifications be?

The potentials of literature for exploring touch

Many of the conference papers and performances engaged with literature and talk of touch – or touching talk. Anna Harris explored the sensory abilities and effects of tactile analogy as well as models and diagrams. It was interesting to witness the ways in which painting, poetry and literature were used by these scholars to explore touch. Touch sensibilities, the painter Lynette Yiadom-Boakye set out, are developed and invoked by our personal, social cultural histories: ‘Just as one learns to see in the world one learns to touch through it’. While Erin Manning asked us to ‘stray from a common-sense reading of the sensory body’ to explore the politics of what a body can do and suggested that it is through touch that we write the relationship between self and other. In conversation between Rizvana Bradley, Hortense Spillers reminded us, drawing on a variety of Black American literature, including the writings of Audre Lorde and Toni Morrison, that ‘the grammars of touch are very different under the painful rubric of historical slavery’. Rizvana Bradley, building on Spillers, drew on the concepts of human life and ‘bare life’ (Agamben) to draw out the need to ‘distinguish between touch as curative and touch as violent’, noting that tactile regimes are entangled in techniques of dominance and power.

IN-TOUCH reflections: The conference surfaced the question – how we, as social scientists, might use literature to interrogate digital touch communication? We have considered developing some speculative fictional narratives from the prototyping workshops we have run, and the use of speculative scenarios more generally. Would analyzing sci-fi visions – reflections of a broader public imagination of digital touch, alongside the technologies we are exploring help us to get at the imaginations we are interested in?

The historicity and situated-ness of touch experiences.

Choreography, movement, a breathing workshop, improvised performance, and differently so the gestural work of speakers brought experiences of touch into the room. Varied and rich, positive and negative touch focused in on the work of the body, techniques of holding and handling, manipulating objects, percussing the body (see Anna Harris’s work), the materiality through which people learn to inhabit and sense the/their body/bodies. The contributors explored ways in which the body is, or felt as, fragmented – through medical training, through transitioning and queering the body, through the digital reconfiguring of body and touch, to create haptic memories and knowledge. The inspiring mix of talks, performances, and films at the conference worked to probe and challenge notions of the body and flesh towards bringing down of framework of ‘normative’ bodies by exploring ‘variation and wrongness’ and, in doing so, provoked new stances to touch. For instance, Kate Elswit spoke of breath and permeability in the context of thinking about touch, in a way that drew connections and distinctions between the inside and the outside of touch, as well as the human and the environment, noting ‘Wind in bodies is called breath. Outside bodies it is called air’. The conference explorations of touch experiences, and embodied memories led to reflections on the historicity of touch, and the need to situate touch experiences. In doing so the variety of touch experiences from curative touch practices through to the violence and pain of touch were surfaced in what Hortense Spillers referred to as ‘the troubled legacy of touch’ in the afterlife of slavery.

IN-TOUCH reflections: Investigating digital touch communication requires us to reflect on, among many things:

In short, whose touch (and whose histories of touch?) matter(s) in the context of digital touch communication?