Dr Ned Barker, of In-Touch, interviews Dr Kate Devlin on the present and future of how sex robots might come to touch our bodies, lives, and society, and the social and ethical issues that arise.

NB: In Turned On: Science Sex and Robots you described yourself as a “pro sex feminist with radical leanings”. How does this perspective inform your research into sex robots?

KD: The reason I use the term pro-sex is in reference to the work of sex educator Betty Dodson. I see sex in a particular way. Sex is not necessarily something sacred or spiritual, it can be that for some people, but it can also be just another form of interaction. It was important to get this across, and lean towards third wave feminism, to show how sex can be empowering. This position helps me to challenge some problematic cultural norms around sex. There is so much taboo around sex, and sex technologies. It gets either treated as a trivial subject, something that is not worthy of studying, or it gets treated as ‘too much’ to talk about. In academia, it is fine to study sex, and touch, for health and for well-being but there is a reluctance to talk about it for pleasure. 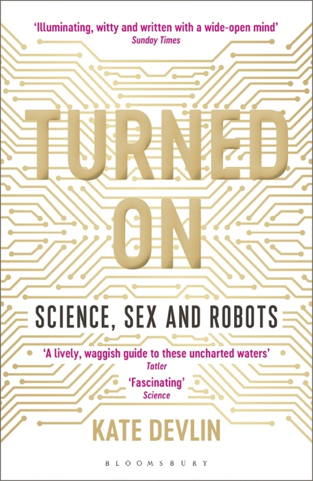 ‘Hype-stories’ are also perpetuated by media centering on fears that someone will touch or harm a sex robot and then go on to do that in real-life. I didn’t find any evidence of that in my research. Contrary to media portrayals the majority of people who own sex dolls (and robots) care for them – and are very careful with them. In debunking these ‘hype-stores’ it is important to understand that there are both practical and emotional dynamics that mediate touch behaviours. Practically speaking users/owners are reluctant to damage to something fragile and expensive. These people cherish their dolls (and robots), and on an emotional level, this also informs how they might touch them.

NB: It’s great to hear begin to unpack how sex robots are touched. What types of tactile experiences are already afforded by current technologies?

KD: There aren’t any commercially available sex robots in the world. There are prototypes but the most advanced robots are essentially high-end sex dolls with limited movement and responsiveness.

The leading company, RealDollX, have a ‘robot’ called Harmony, but she is an immobile sex doll from the neck down, with silicone skin, and an animatronic head so she can smile, blink, and make facial expressions (I am gendering the robot to make it easier). She cannot actively touch. If you touch her, however, her skin feels quite convincing: it’s like touching somebody’s skin that has been moisturised, and feels cold, although the silicone can take on heat by using electric blankets, for example. Some companies make sex dolls out of Thermoplastic Elastomers (TPE), including ones with warming heaters in them – heated vaginas for example – the user’s tactile experience of temperature is very limited.

DS dolls are making what they refer to as ‘sex robots’, but essentially they are the same as their dolls with a little bit of robotics added for movement: so they can kind of actively touch. Sergi Santos was developing a sex robot, Samantha, that actively responds to and reciprocates touch. He ‘hacked’ a doll by putting sensors on the hands, and I think vibrators and sensors in the vagina. Santos was interested in interaction; she was designed so that the more flirtatious or sexual you were with her, the more she would respond to you. His project started to explore issues of consent between a robot and a human.

It is difficult to know exactly how people physically approach their sex dolls or robots. I have talked to people in the doll community. Some of them buy dolls for companionship and give them back-stories, dress them up, sleep beside them and have sex with them. People choose their dolls clothes, dress them, and put make up on them – so there is a lot of different forms of touch going on. It is more involved than you might imagine, and some of these interactions are really important to owners, they place a lot of emphasis on looking after and styling them. They care through touch.

NB: What are your optimistic visions of human-robot sexual encounters?

KD: Doll owners, who are considered most likely to be the people who would buy sex robots, emphasise companionship – such as being able to hold a robot and to be held back. There is sex there but there is also a space for intimacy. Intimacy is likely to play a large part in the future, robots have a potential to interact with and help people. People often say that it would be nice to have someone to hug, or hug you back if you are lonely, and technology has much to offer here. There are a lot of existing sex technologies that provide tactile stimulation, but not in that holding way. I am optimistic that technological advances could provide this. This would expand possibilities far beyond touching robotic erogenous zones, or being touched by them. In fact, sex robots don’t need to take humanoid, anthropomorphized, forms to give simple tactile experiences (like many sex toys).

NB: What about your pessimistic visions for sex robots?

KD: People are worried. I read the headlines, like ‘sex robot molested at tradeshow’ – but it turns out that never happened: a model was on display and it got damaged. I was recently recounting that story, and a guy in the audience said ‘I was there, I was one of the people touching the robot…this was not a sexual thing, we were just going over and poking it, pulling at it, seeing what it was made of’. Nevertheless, there is a moral panic that there will be violence enacted on the robots. This is a difficult area because we don’t know how much this matters; robots are not human even if they resemble humans. Furthermore, there are many people who have violent fantasies but will never act upon them in their life. Therefore, I am sceptical about these anxieties and am willing to give the benefit of the doubt that we know what forms of touch are acceptable between a human and a machine, and we know that this might not translate to suitable human interactions.

Pessimists ask questions like, ‘what happens if we become too reliant on technology’? Who am I to judge if someone really enjoys the tech side of things and not the human side of things? I’m inclined to think, though, that human contact is so fundamental to us that we will always continue touch each other. Just because you might enjoy talking to a chatbot does not mean that you will forget to talk to another human. We don’t need to fear that we are going to be replaced by technology.

Finally, the notion that technology is making us isolated is one of the biggest myths of our time; in many ways technology has made us closer than we have ever been. Face-to-face contact may have reduced but that is not inherently bad. Indeed, some people have limited contact with the outside world but with new technologies they might connect with others to talk, and touch. This is not necessarily better or worse, it is just an alternative. Often, people are more willing to confide and share deeply personal information when they aren’t face-to-face.

NB: It sounds like you are awaiting more evidence and currently ‘giving the benefit of the doubt’. So what do you think comes next?

KD: This is the fun part! It is really difficult to make a realistic human-like robot. It’s technically complex (e.g. it requires a lot of power and energy from lightweight batteries). There is the uncanny valley effect, the more that you make it look human the more freaked out by it we are. And even on a practical level, where are you going to store your sex robot? Are you going to have a secret cupboard?

I think we can still achieve similar forms of intimate relationships by other means. Having disembodied interactions with AI’s is one way. It’s not uncommon for Alexa’s and Siri’s to be part of households. People have adapted really quickly to this way of communicating with robots-without-bodies, and this is fascinating because touch is missing here. It’s like the film Her when Theodore falls in love with his operating system and he can’t touch her and gets really frustrated with that. But the level of intimacy is there, just without touch.

Non-humanoid technologies might an exciting route to increase the potential for ‘robotic touch’. We are now starting to see interesting ‘smart fabrics’ that are customisable as well as malleable. There are robotic devices that you can wear anywhere on, or in, your body that can be reshaped with air or microfluids – you could do some really cool stuff with that. There is scope here for inventions that are not just purely for sex but designed for intimacy and sexuality through immersive experiences. You could even have sensors on your skin that reading and responding to biofeedback information emitted from your body. This could really open up possibilities around touch.