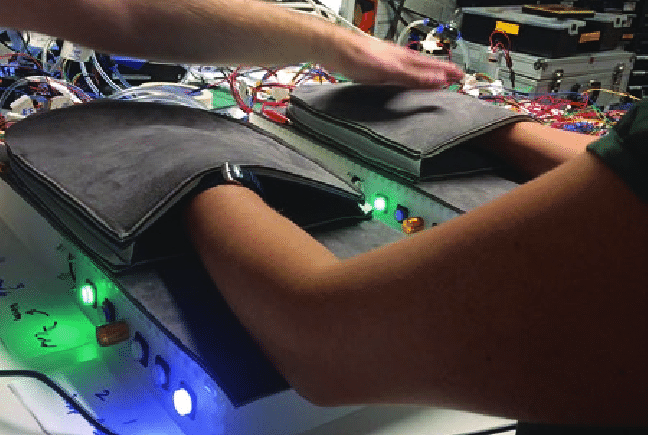 There are many factors involved in ‘touching’ as a means of communication (for example, the firmness with which a person cups someone else’s hand, the bodily warmth (or lack thereof) that is perceived by both people, the amount of movement – or stillness – in the touch, the body part used to touch or being touched); factors that influence the message being communicated. This project brought together a multidisciplinary group with expertise on touch from social science (Jewitt and Price), neuroscience (Fotopoulou), computer science (Berthouze), with the aim of understanding how affective touch can be digitally-mediated to enhance social communication and positive social feedback. It involves the design and development of a prototype interactive system that incorporates some of these tactile sensations to allow two people to send and feel a touch over a distance; and a set of user studies that explore and how two people in different relationship contexts (family, friends romantic partners and work colleagues) use the system to send and receive messages, how they create those messages and interpret and develop meaning – or even begin to establish a vocabulary of “remote touch”.

The Tactile Emoticon System: The Tactile Emoticon (TE) system was designed as a research probe to explore the digital implementation of types of social touch with a focus on affective cues from touch behaviour and their possible meaning (social support, approval, intimacy) as forms of tactile expressions. Three sensations, vibration, pressure and temperature were integrated into the devices to elicit exploration, implementation and conversation around bi-directional touch communication. These tactile sensors were designed to be flexibly used by participants to create their own touch messages. The final design comprises a pair of linked mitt-shaped devices made from soft fabric, mounted on to an acrylic box, which houses buttons and sensors controlling the type of tactile feedback to send to the other mitten. The devices thus enable two people to communicate remotely through touch. Using the mode controls on the left side of the device, users could send (and receive) each of three types of tactile feedback, vibration, pressure and temperature.

The device was piloted in three research workshops to collect user feedback on the experience of using it and to inform the final design iteration. Additionally, there was a control where sensations could be felt locally, to get an idea of the sensation the sender was generating.

User studies: Two user studies explored how pairs of participants used the system, specifically focusing on their use of the haptic sensations for meaningful affective communication. The system helped participants to externalize tactile communication processes and their meaning, and to bring an initial understanding of how touch-based technology might enable tactile affective communication at a distance. The studies were designed around particular social relationships between participants and related communicative situations; namely friends, family, romantic or work relationships, to generate data on different relationship contexts and types and levels of touch, providing a deeper and broader understanding of digital touch by leveraging different scenarios of communication. Scenarios of short textual descriptions were provided to promote a sense of realism for communication and reflection, by prompting participants to imagine a concrete situation in which the target emotion might be felt, for example, loneliness, excitement, distress, sadness, anger and rejection. Studies focused on gaining an understanding of how people’s digital tactile communication takes place and the factors that may affect it in the context of friends, romantic partners and work colleagues; and to explore and examine the process of how participants compose, send and interpret remote digital tactile messages between friends, family and romantic partners.